What is Going on with Global Interest Rates? 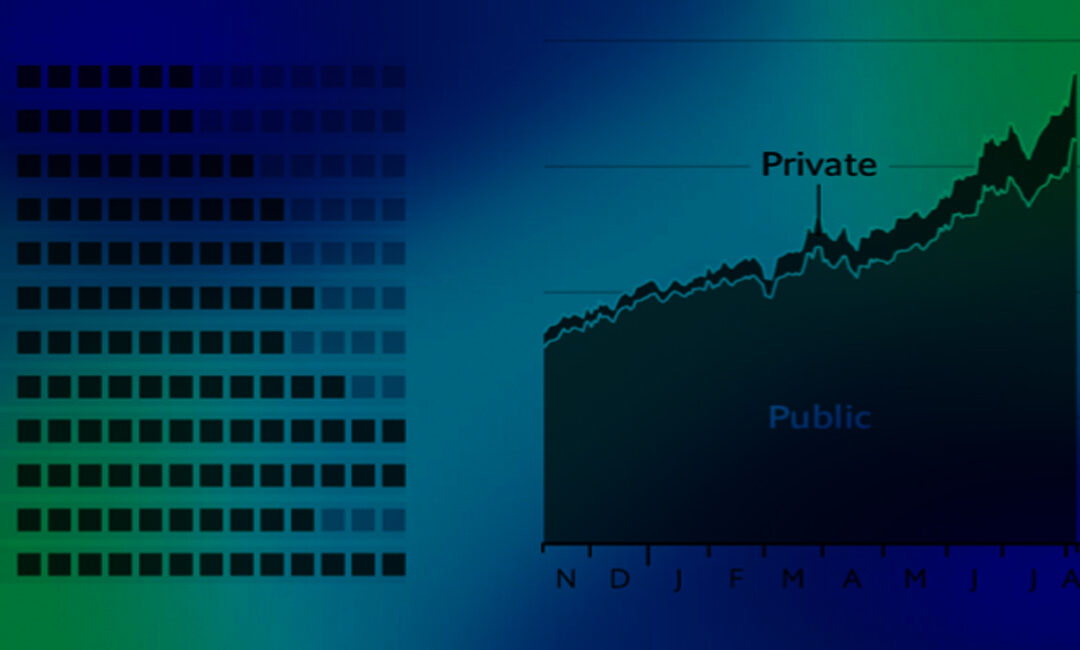 Over $17 trillion worth of bonds have negative yields. Why? How long will this trend continue? How does this end? 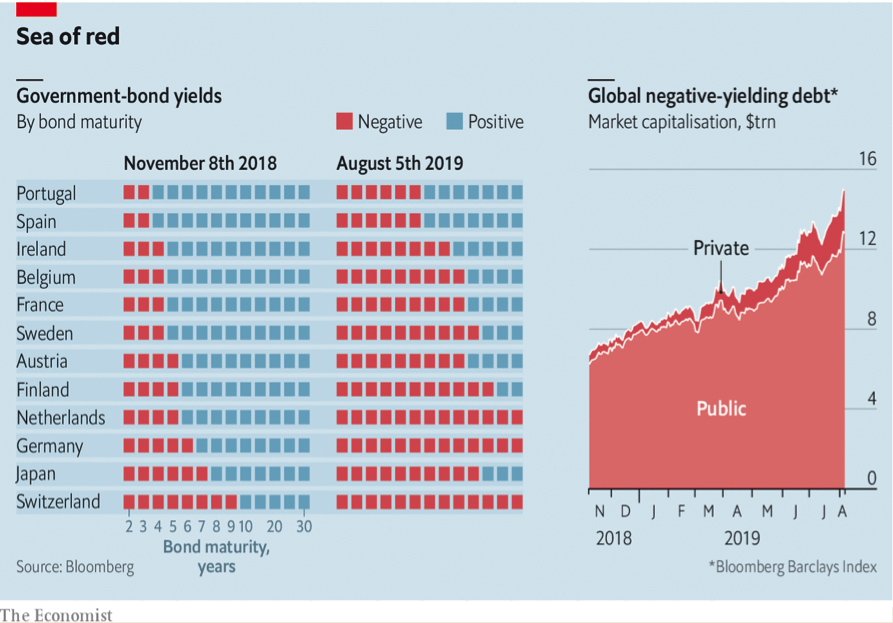 Investors looking for safety face unappealing choices. Low-risk fixed income investments lose money. According to an index calculated by Bloomberg, a quarter of the bonds issued by governments and companies worldwide are now trading at negative yields. Creditors holding $17 trillion of securities will make a loss if they hold them to maturity (see chart above from Bloomberg and The Economist).

As the trade war between America and China intensifies, investors are taking refuge in government bonds, pushing yields down. Meanwhile, central banks, fearing a global downturn, are cutting interest rates. The European Central Bank will most likely ease policy further after the summer.

Central banks have made no secret that they are trying to spark inflation. This has failed. Inflation in Europe is well below the 2% rate targeted in Europe and the United States. Investors do not think that central banks will be successful at achieving their targeted interest rate anytime soon. Five-year forward swaps, which track investors’ inflation expectations, currently predict inflation of 0.9% in Europe and 1.7% in America. This contributes to depressed bond yields since the higher expectations of future inflation are, the higher the yield investors will demand, and vice versa.

We have seen this play out in Japan., As described by The Economist: “The bubble burst, people became cautious and the economy got stuck in too low a gear to stop prices and interest rates from falling.” The Japanese precedent is ominous and frightening. Rich, debt-ridden economies are destined for low growth, possible deflation and a lost economic decade.

Perhaps. Many factors are at play, including fiscal policy and demographics, especially rapidly aging workforces. Automation and technological development have the potential to impact productivity dramatically, counterbalancing negative demographic influences. While the ability to influence many factors might seem comforting, there seems to be a convergence among the world’s leading economies. Germany presents an easy example since it has many economic and demographic similarities to Japan. But, other, seemingly dissimilar economies, are experiencing the same situation – which is not comforting.

Germany’s bond market is now priced for endless stagnation. Its interest rates are negative on everything from overnight deposits to 30-year bonds. But it is striking how depressed bond yields are in countries with only a passing resemblance to Japan, as the chart above shows. Are we in for endless stagnation? Japan’s specific circumstances are narrowly defined but the conditions and consequences seem to be broadly applied.

Essentially, it is the fear that policymakers have permanently lost their ability to spark economic growth. The current trade war and fiscal irresponsibility certainly do not help inspire confidence. Of course, coming to terms with how sustainable the current situation is, and when it ends, is still uncertain.

Japan’s experience teaches many lessons. Its ten-year bond yields fell below 2% in 1998 despite a huge budget deficit. For its long-term interest rates to fall made little sense. Hedge funds began to short Japanese government bonds (a disastrous trade which holds a foreboding precedent for anyone considering a similar trade with U.S. and European bonds). But Japan’s consumer prices and interest rates kept drifting lower.

Ever since, “Japanification” has been a fear that is alternately raised and dismissed. In November 2002 Ben Bernanke gave a famous “it-can’t-happen-here” speech about Japan. The lessons drawn from Japan’s failures were:

Fair enough. After the 2008 crisis, some of these lessons were applied, if unevenly. Ten years later, Japanification is back. It is astonishing how low long-term interest rates have fallen, just as it did in Japan. It is further astonishing how broadly these interest rates declines have spread. For example, in Australia, which has a young population and has not suffered a recession in 25 years, ten-year bond yields are below 1%. Thus, it is much more than Japan’s comparable countries being impacted. It is a global phenomenon that seems independent of specific fiscal, economic, and demographic parameters.

The cause of all this is renewed concern about global stagnation. A synchronized pickup in the world economy in 2017 has turned to a synchronized slowdown. Previously uncorrelated asset classes and independent securities seem to now be correlated, exacerbating the direction of market movements – in this case, downward. Central banks, including the Fed, are cutting interest rates. But there is more to it than that. With short-term interest rates already so low, there are grave doubts that central banks have the power to get their economies back on track. This pessimism can be shown, for example, in markedly lower forecasts of medium-term inflation derived from the swaps market. If there is an economic shock, monetary policy in Europe and Japan has few options, and most likely would be unable to provide any real impact.

With little available to monetary policy, it seems the only reasonable alternative is a more effective fiscal policy. If the economy lacks demand, governments can help to fill it by borrowing cheaply to cut taxes and raise spending. After all, Germany can borrow 30-year money with negative interest rates. Investing this borrowed capital in the local economy would most likely bring a positive return on that extremely low cost of capital. Even though this may seem like a no-brainer, the politics are not there…yet. Perhaps, the Japanification of bond markets will move things along, but the economic risks must be clear, perhaps to the point of a crisis, before any shift would take place. Most likely, only a crisis will cause any meaningful action. Especially in Germany where any hint at deficit spending and the risk of inflation is anathema.

The political, and therefore fiscal, response to the threat of stagnation might ultimately prove potent. Although, with Japan as a model, it seems that policy would need to be much more radical than it was in Japan. This appears remote, given the current political environment. While there are discussions regarding fiscal stimulus in countries like Germany (notoriously hostile to fiscal stimulus), any real action seems very far off and still unlikely. Bond yields will most likely languish for quite some time before there is any rise from the anticipation of fiscal stimulus. The spark would be when developed economies, such as Germany, among many others, recognize they can earn a substantial return on investment in their domestic economies given their current cost of capital.

What does all this mean?

Until there is a dramatic spark of fiscal stimulus, expect

Essentially, this appears to be a time to withstand volatility and be patient for future opportunities to be aggressive.

The fate of globalization in the world economy is still the overall force that drives the economic system. Government policy can be impactful. But the overwhelming influence is the global economy. If economic growth, especially cross-border trade, can thrive again, this would provide enough stimulus to sustain healthy economic growth and overwhelm fears of stagnation and a potential lost decade. The impact of global economic growth cannot be understated. This is the engine that stabilizes interest rates and drives equity valuations. It is currently under threat. Will it recover or has it been mortally wounded? (please see “Globalization – Faltering, Slowing or Recovering? and “The global economy”).