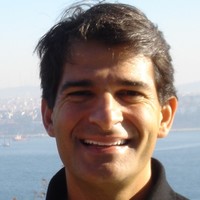 As Chairman of Arcadia Capital Group, through offices in San Francisco and London (and cooperative arrangements in Shanghai and Singapore) invested in companies in the U.S., Asia (mostly China), and Europe over the last 30 years. Mr. Mitsakos has served on the board of directors to over 30 companies.

Mr. Mitsakos started his career at Goldman Sachs and co-founded Arcadia in 1989.

He holds an MBA from the Harvard Business School and degrees from the Harvard Kennedy School in Leadership and Public Policy, the MIT School of Computer Science in Advanced Technologies, and a B.S. from the University of Southern California. He is a contributor to Harvard University’s Innovation Center and a former lecturer at UCLA’s Anderson School of Business.

He is a member of the MIT Technology Review Global Panel.

Mr. Mitsakos developed a 40-lecture course on Investment Principles and Strategies. An accompanying book will be published soon.

Mr. Mitsakos assists UCLA’s Center for Cerebral Palsy and the Neurological Rehabilitation Hospital of the Pacific. He is a Harvard Community Partner and volunteers at The People Concern in Santa Monica, CA.